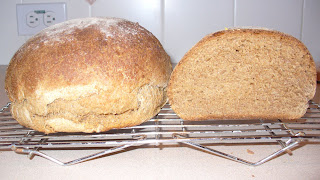 I recently came across a video of Richard Bertinet’s slap-and-fold method of working bread dough. You can find the video here.

As with the No Knead Bread phenomenon that swept the foodie sites a couple of years ago, I wanted to modify this to work for me. What that means is I wanted to use fresh ground, whole grain flour. I decided to try this new method with an overnight soaked dough that I like because it has great flavor and usually turns out pretty fluffy. I wanted to know how the slap-and-fold method would affect the consistency of the dough.

My first challenge was how wet the dough was. Halfway through the slapping and folding I realized that perhaps a fluffy dough was not the dough to be doing this with, I probably should have started with a more rustic dough. Also, it might have made sense to try it with all-purpose flour, as the recipe calls for, but I didn’t. The flour I used was fresh ground, 1/2 spelt, 1/2 hard red wheat, soaked overnight in buttermilk.

After I mixed in the rest of the ingredients I followed the instructions and began to slap the dough against the counter. I dutifully resisted the urge to add more flour. The dough was very wet and it was tempting to add flour at least to clean off my hands. It took a while to learn to control the dough. I must be the world’s messiest dough slapper because there was dough everywhere. Little bits would fly off and stick to the back wall, to the underside of the cabinets, as well as all around me onto the floor. it also seemed to take a rather long time for the dough to become cohesive. But I persisted. I know that I worked the dough far longer than the video suggested was necessary but I did eventually get a nice smooth ball of dough which I returned to the bowl and covered to let rise.

The dough took longer than expected to rise, about 2 hours. Punched down, formed into two boules and set to rise again. This rise seemed normal. I baked it in the oven and it seemed to turn out well. As the picture shows it made two really lovely boules, nice and fragrant, soft crust, dense crumb with a rich flavor. The bread turned out really well and was worth the effort.

I’m not convinced that I’m going to start slapping dough on a regular basis but I am going to try this again. I plan to back up and start with Mr. Bertinet’s sweet dough recipe and then try again to modify it to whole grains. It was fun to experiment with the dough and see the results; it’s also fun to think about what will happen with other changes and then try those ideas out.

I believe we need to do more than simply eat our food, we need to enjoy it. So I encourage you to play with your food, savor it with all of your senses; that includes thinking about how it’s made.