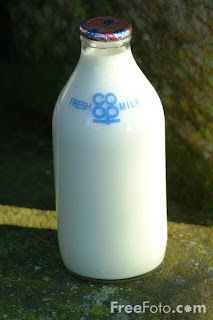 Recently I had a conversation with my friend Kay about dairy products which mostly centered on our family’s decision to purchase organic milk products. We choose to purchase organic milk, butter, cottage cheese, cream cheese, sour cream, and yogurt. Organic sliced cheese isn’t easily available in our area so we have to bend there but we try to buy brands that at least promote that they do not use recombinant Bovine Growth Hormone (rBGH).

The conversation centered around the reasons for consuming organic dairy.  The first is that it supports organic farming which means no genetically modified organisms are fed to the cows, they are not given antibiotics or hormones and no pesticides are used in their environment.  Kay countered with the thought that it was cruel to not give antibiotics to a cow who has an infection.  That is certainly true and I would not expect a sick cow to be denied antibiotics.   In organic farming the practice is that if a cow requires antibiotics that animal is removed from the organic herd and treated.  The cow is then sold to a conventional dairy operation.  Having said that, research shows that organic cows, because they are not milked as heavily, suffer much less often from mastitis than conventional cows.  Canadian scientists (Canada has banned this substance) reported a 25% increased risk in mastitis in cows treated with rBGH.
I don’t believe that drinking artificial hormones is good for anyone but I especially do not want to expose my daughters, to extra hormones if I can control it.  In an effort to make dairy operations more “efficient” Monsanto developed rBHG.  This tremendously increased production by as much as 50% and there are reports of  farms where cows need to be milked three times per day; this was touted as a great success.  But success comes with a price.  According to this article referencing the Journal of Reproductive Medicine twinning rates have tripled in this country since the introduction of rBGH/rBST. It makes you wonder what the continued genetic effect of these hormones will be on children that were conceived while their mothers consumed these hormones.
Leaving the hormone and chemical issues aside, organic farming methods are more humane for the cows.  Organic farms house their cows in less crowded conditions and the cows get more fresh air, and tend to be pastured, meaning they eat grass.  A recent European-wide, QLIF study, published in the Journal of Food of Science and Agriculture, showed that cows who eat grass produce milk that is higher in Conjugated Linoleic Acids (CLA’s) which are beneficial for heart health and decreasing diabetes risk.  They also reported higher omega-3 levels in milk from organically raised cows.
Is organic dairy more expensive?  Yes.  It is worth it?  Absolutely.
If you cannot make your budget stretch to cover organic dairy I strongly urge you to not consume products tainted by rBGH.  This website will give you a list of producers in your state who are artificial hormone free.
photo courtesy of freephoto.com