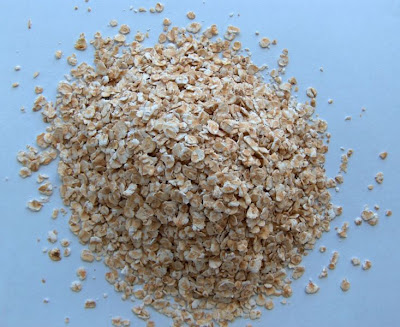 A question recently posed at a forum I belong to was about the nutritional differences between barley and oats. The poster noticed that barley flakes were less expensive than oatmeal and wondered if barley flakes were a good substitute for the oatmeal. Here’s my response:

The biggest difference is that barley is a glutinous grain and oats are not, so if gluten sensitivity is an issue don’t substitute the barley.  And, as people who do have gluten sensitivity know, you need to be sure you are getting gluten-free oats because they are frequently grown near wheat or processed in the same plant and this can be enough contamination to be an issue.

Barley flakes tend to be not as soft or tender as oat flakes (oatmeal), but they are still a great cereal, or addition to soups and stews.  I sometimes use mine to substitute for 1/2 the oatmeal in a homemade granola recipe.

These facts are from the back of the packages. To me this would indicate that the 1/2 C measure of barley would be slightly higher in calories, have less fat, more fiber and more protein than the oats but would probably be chewier.

Be well
photo courtesy of commons.wikimedia.org/wiki/User:MarkusHagenlocher