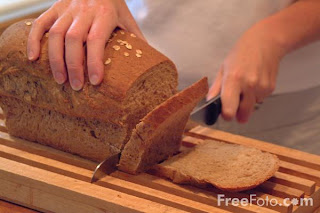 On a forum that I belong to Shannon asked the following question: “I’ve used vital wheat gluten to achieve a more tender crumb when baking traditional/artisanal breads with whole grain flours. I’m still not sure if vital wheat gluten is a heavily-manufactured and processed product. Anyone have experience or knowledge on this? If it is heavily processed, is there a good substitute in whole grain baking?“

Here is my reply:

Gluten is the protein in wheat, rye, barley and triticale. There is some controversy as to whether oats have gluten or not. Obviously if there are any celiac or gluten sensitivity issues you cannot use gluten in any cooking or baking. This answer assumes there are no gluten issues.

Vital Wheat Gluten is nothing more than concentrated gluten. Many vegans and several Asian cultures use it to make a meat substitute called seitan (sometimes referred to as “wheat meat”) which can be cooked almost like meat.

Gluten, especially used with whole grain flour, is usually referred to as a conditioning agent. This is because the extra fiber in the whole grain flour retards the gluten and slows down the rise. By ‘conditioning’ the dough you can get a better texture, a higher loft, and sometimes a moister crumb. Gluten is also added to low gluten flours to get the dough to stretch. The typical amount to add is 1-2 Tbsp per batch. Be aware that if you add to much your loaf with over-rise and then collapse.

Other conditioners include lecithin (you can use approximately 1 tsp per loaf in your recipe), citric acid (just a pinch, okay a generous pinch if it is a two loaf batch, otherwise your bread will taste very citrus-y) and powdered ginger (as my Uncle Joe used to say, “It aggravates the yeast.” Use up to 1/2 tsp per loaf). You can combine these conditioners in differing amounts to see what will work with your recipe. You can also use barley malt as a conditioning agent.

Be aware that commercially there are lots of chemicals that are used instead of natural substances. Chemical dough conditioners (also called improving agents) include azodicarbonamide, carbamide, sodium stearoyl 2 lactylate, calcium stearoyl lactate, bethoxylated and succinylated monoglycerides, and polysorbate 60.