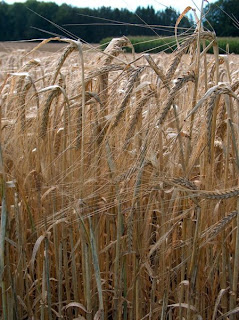 My recent post about substituting barley for oats has generated a number of inquiries about barley itself so I thought I would address them here.

Barley is a very versatile cereal grain that we get from grass, Hordem vulgare. It is cultivated all around the world and has a wide variety of uses, from animal fodder to cereal to alcohol to malt and more.   Barley contains all eight essential amino acids and is a very rich source of both soluble and insoluble fiber.  It is also a good source of selenium, a trace mineral that is helpful to the immune system and with helping to regulate the thyroid.

Before I go any further I should also mention that barley is one of “those” grains; it contains gluten.  Many more people are being diagnosed with Celiac Disease or are gluten sensitive.  If you have gluten issues of any kind it is best to avoid all forms of gluten; I encourage you to speak with a healthcare practitioner to determine if you think you have any gluten issues.
Barley comes in several forms.  The most common is pearled which is frequently used for soups or as a substitution for rice in pilafs and stuffings.  Pearled barley is not considered a whole grain because all of the bran coating has been polished off.  Scotch, or pot, barley is the next step up the ladder with minimal polishing but is also not considered a whole grain because although some of the hull remains too much of it has been removed.
Next is hulled barley, sometimes called barley groats, which is considered a whole grain because of the fiber contained in the hull, left after the outer, inedible layer has been stripped away.  Hulled barley requires soaking due to the added fiber, but it gives a lovely texture, or bite, to stews, soups, cereals, puddings, and other dishes.  One of my favorite breakfast dishes is a crockpot cereal made with oat groats, hulled barley groats and brown rice.
Dry pearled, scotch, and hulled barley can be ground into flour and used in baking.  Barley flour is light and delicate in flavor however you need to be aware that barley is a low gluten grain. Therefore it may need to be combined with other higher gluten grains when using the flour in baking.  Used by itself barley flour makes a wonderful, delicate cookie.
Barley can also be flaked, similar to oats, and used as a cereal or added to baked goods for texture and flavor.  Due to the flaking process this is not a considered a whole grain so the amount of beneficial fiber is not very high.  Flaked barley can also be ground into flour; this is best done in a food processor or blender rather than a grain mill to prevent any clogging.  As with corn, barley can be toasted, ground, turned into grits and eaten as a cereal or side dish or, similar to wheat, it can be turned into a bulgur-type texture.
Last, but certainly not least, are the benefits of barley greens.  Many people like to juice and drink barley grass, similar to wheatgrass, or to use barley greens powders made from dehydrated barley grass.  Because barley grass is made from the leaves, or shoots, of the barley it does not contain gluten however the risk of contamination with the kernel or the risk of not harvesting at the right time is a possibility so barley grass and barley greens should not be consumed by people with gluten issues.

Because of the varieties of textures and it’s use in so many dishes I encourage you to try adding barley to your diet, it makes a great change from rice or pasta.
Crockpot Breakfast Cereal
makes 4 servings
place in crockpot:
1/3 C. each oat groats, hulled barley and brown rice
Three cups of water
1/2 C. dried fruit
Set crockpot on low overnight
In the morning add:
2 T. ground flax
1 T. ground cinnamon
the sweetner of choice (we tend to use either honey or maple syrup)
Enjoy!
photo courtesy of de.wikipedia.org/wiki/Benutzer:MarkusHagenlocher