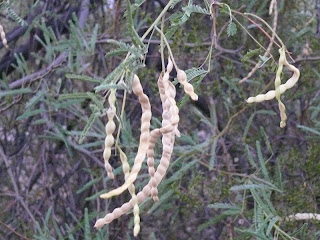 My friend Misty asked me “What do you know about mesquite flour?”  Mesquite (genus Prosopis) is a deciduous, leguminous tree that grows quite well in Texas and Mexico and has a range that goes as far north as Kansas and westward to southern California.  Most people use the wood to create a flavorful smoke that imparts a fabulous taste to barbequed meats.  But mesquite also has another purpose.

I had heard of people using mesquite flour before I moved to Texas, a high protein legume that was high in fiber and originally part of the Native American diet for Southwestern tribes.
Researching it further I have discovered that it apparently also has a good profile for calcium, manganese, iron, zinc, and is high in the amino acid lysine.  Because of it’s high soluble fiber content and low glycemic index, in spite of a reported sweet flavor, mesquite flour is believed to be a good choice for diabetics.
Mesquite flour was traditionally consumed by Pima Indians.  With the advent of a modern diet many of them have developed diabetes; this seems to be attributed to their decline in consumption of mesquite flour.  According to a study published in the American Journal of Clinical Nutrition “the slow digestion and absorption of starch in traditional foods was a factor that helped protect susceptible populations from developing diabetes.”  These traditional foods included corn, lima beans, white and yellow teparies, mesquite, and acorns.  Another study published in the Journal of Ethnopharmacology highlighted an ethnobotanical study in Israel which researched plants used for the treatment of diabetes; one of the plants included was mesquite.
Because mesquite is a legume I am assuming that it has a non-glutinous profile making it best suited for quick breads, cakes, and muffins or cookies rather than for a yeasted bread.
Mesquite also has another use, the flowers are attractive to bees and I have heard that mesquite honey is quite flavorful.  You can purchase mesquite honey on the internet as well as mesquite flour. There are also recipes available that call for mesquite flour.  All in all it seems like it might be somewhat similar to another legume flour, carob, which I wrote about here and here. Both are sweet, high in fiber and provide a good protein content.
photo courtesy of commons.wikimedia.org