I’m a fan of consuming fermented foods. They’re good for your gut and a very healthy way to add probiotics to your system.  While I certainly don’t make all of the fermented foods that I could, I do make some; I buy others.  The challenge is finding the time to make everything while still finding time for family, work, and real life. One of my favorite foods to make however is kombucha.

This is in part because the price for kombucha has risen to an incredible $4.19 at my local grocery store.  That seems rather steep for A 16 ounce bottle of fermented tea.  Especially when you consider that all you need to make your own is a glass one-gallon jar, some kombucha (or raw and unfiltered apple cider vinegar) to get you started, 8 tea bags, 1 cup of sugar, and water.  All of that will make a gallon of the stuff.  That’s eight pints or more than $32.00 at grocery store prices.  The at home price (not including the cost of the jar) is less than $1.00. It’s definitely worth it to make your own.

The picture at the top is my lovely jar, full of scobys.  That’s an acronym for Symbiotic Culture of Bacteria and Yeast.  The “pancake” that takes all of the sugar and consumes it while fermenting the tea and adding beneficial colonies to it.  Amazingly enough each time you brew a batch it makes a new “baby.”  Eventually you have so many that you wind up giving them away.  It’s a great way to make friends and share the healthy benefits of this wonderful drink.

The collage directly above is photos of the process of making kombucha.

After my initial batch of kombucha is done brewing I do a secondary brew by adding fruit, sealing the jar, and letting it sit at room temperature for 24 hours. This extracts the sugars (and flavor) from the fruit and makes a fizzy drink at the same time. The longest I’ve ever let it sit is 36 hours because it generates so much fizz I’m afraid to let it go longer, I don’t want to shatter the jar. One of these days I’ll get around to buying a fermentation lock and then I won’t have to worry about exploding jars.

After it’s done I decant the flavored kombucha into recycled kombucha bottles. This time I used strawberries, blueberries, and blackberries.  The blackberries, unlike most fruits, were still firm, pretty tangy, and delicious, rather than bland, sour, and soggy. If you mash them first you get a better flavor in the kombucha but I wanted to try eating them afterwards to see what it was like. Most fruits are not okay and definitely not nearly as delicious as I thought they would be. That’s probably due to the fact that the fermentation process sucks out the sugars from the fruit in order to create that secondary fermentation.

If you’d like to know more about kombucha, including specific brewing instructions and recipes using kombucha be sure to get your copy of my ebook. 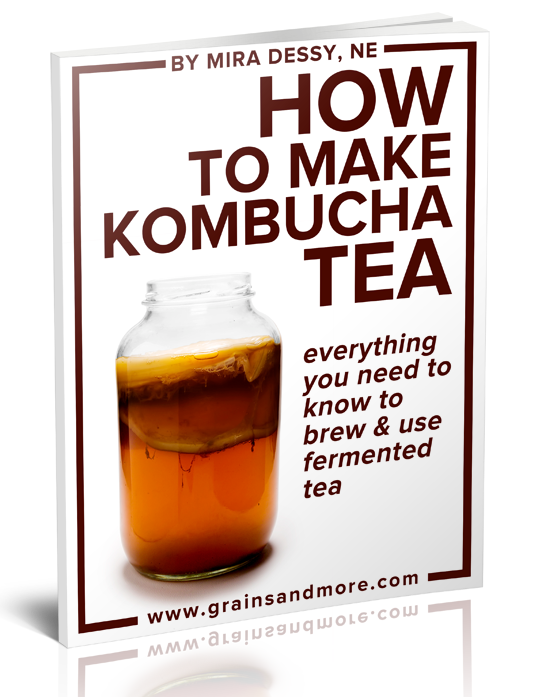