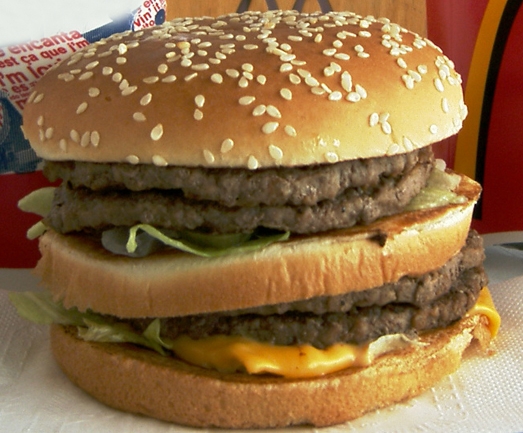 A recent headline, “McDonalds to eliminate eight menu items”,  touted the fact that McDonald’s is examining their menu, reducing choices, and possibly changing some of it’s ingredients.  They’re also trying to shake their reputation as the “supersize me” place.*

McDonald’s is changing, supposedly in response to consumer demands.  But there are still so many things wrong with this.  They are nutri-washing.  Putting their spin on it to try to misdirect you away from the fact that this is still high caloric, nutritionally poor, chemically laden JUNK food.  They want your dollars, that’s why they’re changing.  But they’ll do the least amount possible and trumpet the changes as loudly as they can to try to get your attention.  Their claim is that this is in response to consumer demand. That’s great, it’s a good thing to listen to what people want.  But let’s be honest, it’s also because profits are down.

I believe they are failing to take into account the fact that fewer people are going to McDonald’s not because they have “too many choices” or because it takes “too long to get through the line.”  They are not going because they are choosing to eat whole, more nutritious, real food.

When I was a kid going to McDonald’s was a treat.  We rarely went and if we did it was special.  Somehow over time McDonald’s has become a daily meal choice for a lot of people.  Not just a simple burger and fries, not just for a treat, this is how we have been encouraged to feed ourselves.  And we’re paying the price for it in health.  Yes, that $1 value meal or that $.79 supersize option may seem like a good deal financially, but when it comes to your health it’s a poor investment.

Let’s be honest, McDonald’s isn’t the only company doing this.  Burger joints, fast food places, and other junk food options abound in our society.  But if we want to be healthy, if we want to really nourish ourselves, we need to learn to make different choices.  McDonald’s is getting picked on mostly because they’re one of the biggest and because they keep trying to spin it their way.

Their food transparency campaign backfired badly because they tried to look like they were responding to consumers demand for information.  Well, consumers DO want more information.  But they were shocked to discover what was really in their McD’s meal.  (Of course from a Pantry Principle perspective the transparency campaign didn’t go far enough as it didn’t address GMOs, antibiotics, pesticides, etc; it simply mentioned ingredients without revealing their impact on health — such as TBHQ which has been linked to cancer and asthma among other things.)

When it comes to this corporate spin it’s important to learn how to look at what’s really going on.  Are changes being made across the board or just to a few items?  Is there an underlying reason for the changes?  Is the company touting “response to consumer demand” as their pat-themselves-on-the-back reason for change?  Sadly they’re quick to give themselves props for being responsive but frequently they only do the bare minimum when it comes to this responsiveness.  Trying to do just enough to convince consumers to come back and buy their products.  And let’s not forget, while we’re examining the headlines and corporate messages, are we eating the way we really want to?  Are we nourishing ourselves and making choices for health?  That last question probably should be the first one when you look at what’s really in your food.

*If you still haven’t seen the documentary film Super Size Me by Morgan Spurlock, or you want to watch it again, it’s available for free on Hulu.