Kraft recently released a new line of “Jell-O Simply Good” products. According to them, they are “delightfully honest” and “made with the good stuff.”

However, I found several questionable ingredients still lurking inside. Let’s take a look…

A Closer Look at the Ingredients in Jell-O Simply Good

Cane sugar is the most abundant ingredient in this product (19 grams per 1/2 cup serving to be exact). And it’s most likely made from genetically modified and pesticide laden sugar cane.

Gelatin gives Jell-O its gel-like consistency. And it can be a health-promoting ingredient if sourced from grass-fed and pastured raised cows. However, in this case, the source of gelatin is unknown.

Dried strawberry juice provides a “natural” flavoring. But, it doesn’t add any nutritional value. In fact, it only adds more sugar.

Adipic acid gives Jell-O a bit of tartness. While it is an organic compound, adipic acid is the precursor of nylon. And it rarely occurs in nature.

Disodium phosphate helps control acidity. Scientists synthesize it by combining phosphoric acid with a sodium compound. According to the Environmental Working Group, sodium phosphates may increase one’s risk of heart and/or kidney disease when consumed in excess.

Sodium citrate also controls acidity. And it is generally considered safe in small doses. However, it’s most likely made from genetically modified corn. Thus, those with corn allergies should avoid products with sodium citrate.

Natural flavor additives lead consumers to believe the flavor is all natural. However, this is far from the truth. While the final product is derived from something found in nature, chemical solvents are used to manufacture them. Further, food companies are not required to disclose the actual contents of natural flavors. Thus, we’ll never really know!

It’s also worth noting that Jell-O Simply Good truly gets its flavor from these “natural” flavors as opposed to strawberry juice. Juice is actually quite bland and its flavor diminishes over time. On the other hand, scientists specifically design natural flavors to be potent and shelf-stable.

Fumaric acid is another additive used for tartness. In general, small quantities are considered safe.

Turmeric oleoresin is supposedly a “natural” coloring agent made from turmeric. However, volatile chemical solvents are used to make it. And when fed to rats and mice in this study, it had carcinogenic effects.

According to the same study, consumption of turmeric oleoresin was also associated with a higher incidence of stomach ulcers and inflammation of digestive organs.

And in case you’re wondering, human safety studies don’t exist. They wouldn’t be ethical. And this is true for most food additives.

Vegetable juice is used for coloring in this product. And it’s relatively benign. However, the type of vegetable juice used is unknown. And the vegetables are most likely grown with pesticides.

The main difference between Jell-O Simply Good and the original Jell-O mixes is the removal of artificial flavors and dyes. This is a step in the right direction. But, far from “simply good” or “delightfully honest” in my opinion.

Other than the flavors and colors, the products are almost identical. Both have questionable additives, zero nutritional value, and an abundance of refined sugar. 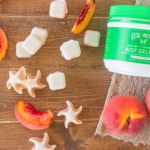 As previously mentioned, gelatin can be a nutritious addition to your diet. However, quality matters. I recommend using a clean, no additive gelatin made from grass-fed and pastured raised cows.  My preferred brand is Vital Proteins.

Here is a fun recipe you can use to make homemade “jello” gummies with fresh juice and natural sweeteners.

Do you already use gelatin? If so, what are your favorite ways to incorporate it into your diet?