Is the “Natural Flavoring” in Your Food Really from a Beaver's Butt?

You're probably aware that most modern foods contain flavoring agents that are less than natural and wholesome. What you may not know, though, is that even natural flavorings aren't necessarily what you think they are. A great example of this is a chemical called castoreum, which under FDA rules can be simply labeled as “natural flavor.” Though it is absolutely natural, castoreum is probably the last thing you'd willingly put on your food. The reason isn't that it tastes or smells bad, but that it's sole natural source is, somewhat disturbingly, a beaver's bottom.

Harvesting, History, and Uses of Castoreum

No one knows exactly when castoreum's use as a food additive started, but a 2007 safety review estimated that it had been in use in the food industry for at least eight decades at that point. Its earlier use as a perfume ingredient may have inspired experimentation with it as a flavoring agent. Castoreum is known to be useful in simulating raspberry, strawberry and vanilla flavors.

Perhaps the longest-standing use of castoreum is for medicinal purposes. The secretion appears in Roman medical recipes and its gathering is even mentioned in Pliny the Elder's Natural History. Today, it is still used by believers in homeopathic medicine as a remedy for everything from tetanus to digestive disorders.

With all of these different uses, you might be wondering just how much castoreum you've eaten over the years and how many beavers have had to be milked or killed to produce it. The good news, if you're currently eyeing everything in your pantry suspiciously, is that castoreum isn't at all common as a food additive. In the United States, only about 292 pounds of castoreum are used each year. The difficulty of extraction usually makes other flavoring agents much more cost-effective, as evidenced by the fact that 20 million pounds of vanilla is still used in the U.S. food industry each year to provide vanilla flavoring that could, in theory at least, be simulated just as well with castoreum.

With that said, some specialty products have leaned more heavily on castoreum as a flavoring agent over the years. Cigarette manufacturer Philip Morris, maker of the Marlboro brand, is known to have flavored some 400 billion cigarettes with castoreum in 1991. The inclusion of extremely tiny amounts of castoreum was used to make the cigarettes sweeter and better-smelling. Incredibly, the entire production run used just 8 pounds of the substance. So, if you smoked Marlboro cigarettes in the early 1990s, you probably inhaled a minuscule amount of castoreum. 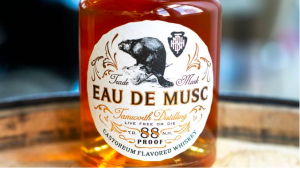 Another specialty product that has historically used castoreum, and still does to this day, is a Swedish schnapps that is actually supposed to taste like a beaver's butt. The liquor is referred to as bäversnaps, literally meaning “beaver schnapps” in Swedish. The drink has a strong, musky flavor that is produced by soaking castoreum in high-proof alcohol, which takes on the flavor over time. Though it may not be for everyone, at least bäversnaps uses castoreum openly, rather than labeling it as a “natural flavor.” And an American company is producing a Eau De Musc, a castoreum flavored whiskey. This represents the first time I've seen castoreum openly labeled on a food or beverage product.

So, while the natural flavor in your favorite foods could hypothetically contain castoreum, the odds are that you've either never eaten it or have only ever had an extremely small amount. Still, the fact that castoreum was used in the past and is still used in rare cases today is just another reason that you should always make a point of avoiding those ingredients labeled as “natural flavor.” It's important to know exactly what's in your food.

I am not a doctor. The information on this website should not be considered medical advice and is not intended to treat, diagnose, prevent or cure any conditions, physical or otherwise. Information provided on this website has not been reviewed or approved by any federal, state, or local agency or healthcare group. Opinions expressed are solely those of the author and do not represent any particular individual or professional group. © 2006-2020 Mira Dessy & The Ingredient Guru. All rights reserved.